In this edition of the JRC Capital Management Weekly Outlook we analyze the exchange rate of the euro against the pound sterling.

Brexit is getting closer and closer, but there is still plenty of need for clarification. Before the turn of the year, the British Prime Minister Theresa May was able to win a vote of no confidence. On the 15th, the British House of Commons will vote on the agreement negotiated with the EU and the omens are not good for May – the critical voices are getting louder and louder. Several warnings have been issued that a no-deal Brexit could have chaotic consequences. Recently, there have been several speculations about postponing Brexit. It remains very unclear and the events surrounding this topic will determine the course of the EURGBP significantly.

There is comparatively little relevant economic data that can cause volatility in the currency pair. Which is actually quite positive in terms of the political situation. The highlights of the week are the UK consumer price index, which will be published on Wednesday, and the UK central bank’s banking environment report with the European consumer price index on Thursday. 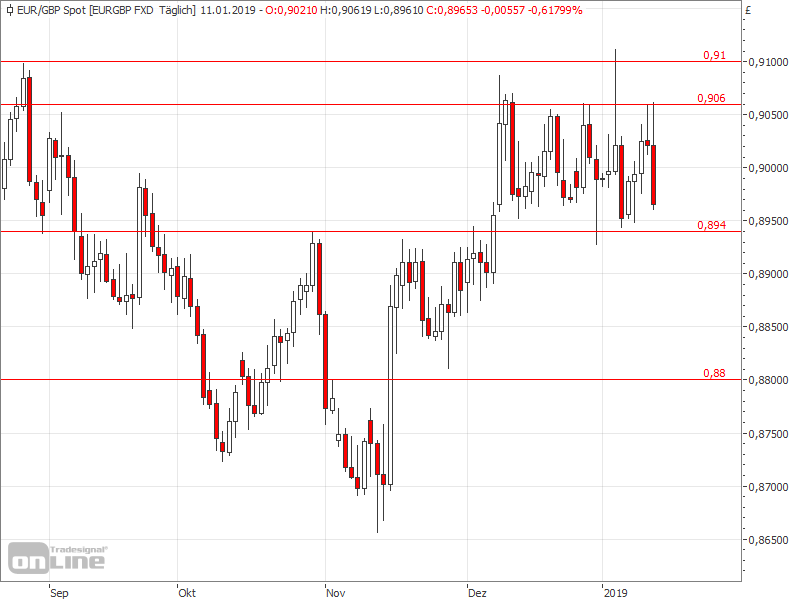 Since December, the EURGBP has been hovering in a very narrow range of just over 100 pips between 0.8940 and 0.9060. Except for a few times, the course was unable to break these levels. If there is no clarity about Brexit, there will probably not be a clear, longer-term trend. Accordingly, these two areas also form the first important resistance and the first important support for the currency pair. The price is currently at the lower end of the sideways range at 0.8965. If price is able to break out of this range, another important area of support is at 0.8800. If the price moves back up and breaks out of range, the next important resistance can be located at 0.9100.

This website uses cookies to improve your experience while you navigate through the website. Out of these, the cookies that are categorized as necessary are stored on your browser as they are essential for the working of basic functionalities of the website. We also use third-party cookies that help us analyze and understand how you use this website. These cookies will be stored in your browser only with your consent. You also have the option to opt-out of these cookies. But opting out of some of these cookies may affect your browsing experience.
Necessary immer aktiv
Necessary cookies are absolutely essential for the website to function properly. These cookies ensure basic functionalities and security features of the website, anonymously.
Functional
Functional cookies help to perform certain functionalities like sharing the content of the website on social media platforms, collect feedbacks, and other third-party features.
Performance
Performance cookies are used to understand and analyze the key performance indexes of the website which helps in delivering a better user experience for the visitors.
Analytics
Analytical cookies are used to understand how visitors interact with the website. These cookies help provide information on metrics the number of visitors, bounce rate, traffic source, etc.
Advertisement
Advertisement cookies are used to provide visitors with relevant ads and marketing campaigns. These cookies track visitors across websites and collect information to provide customized ads.
Others
Other uncategorized cookies are those that are being analyzed and have not been classified into a category as yet.
SPEICHERN & AKZEPTIEREN