Read our assessment of the EURUSD currency pair in the JRC Capital Management Weekly Outlook.

Recently, concerns about a flagging economy, Brexit and the trade dispute between the United States and China have increased. Mario Draghi, head of the European Central Bank, addressed precisely these risks in his speech. The risks have increased, but a recession remains unlikely. Nonetheless, an interest rate hike is unlikely in this one. Draghi’s “dovish” statements are no surprise. The euro lost a little. In contrast, as in the past few weeks, volatility remained at a low level. The uncertainties for the currency pair remain high on both sides of the Atlantic, so that a trend direction does not really emerge.

Some important economic data is due for the fifth calendar week. Some are also expected from the USA, despite the “government shutdown”. The US administration has been shut down for 34 days now, as parliament refuses to help finance a wall on the border with Mexico and Donald Trump, conversely, rejects the budget proposal. The most important dates for the next week are: the trade balance and consumer confidence from the US on Monday, the German consumer price index and the interest rate decision from the US on Wednesday, the gross domestic product of the euro zone on Thursday and of course the labor market report from the United States on Friday . 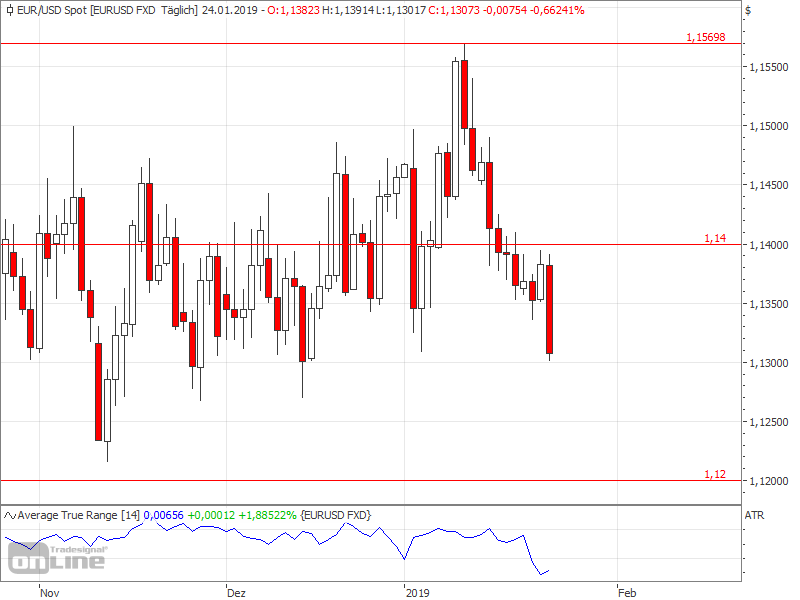 For a few months now, the EURUSD has been moving sideways in a relatively narrow range. The low volatility can also be seen in the ATR indicator, which has been at a low level in the last few years and recently fell even lower. In the past few weeks, however, a short-term downward trend has established itself. The price is currently at 1.1306. In a very important area of support. In the last few months the course turned several times in this area.

If the price stays in its sideways range and moves up again, the first resistance is at 1.1400, over the last few months the price has oscillated around this area. In the long run, the target is 1.1569 high.