Water Utility Stocks – The Winners in an Incipient Crisis?

While the tech industry has been through a crash, and meanwhile also many stocks from other sectors, especially consumer-related industries, have also companies, deep in the red, there are a few industries that have so far have been able to escape this crisis.

Especially basic utilities that consumers cannot do without and that have not been so so much affected by the current energy crisis and inflation,
could currently proving to be a stable investment. The raw material water plays an important role in this,
on the one hand as foodon the other hand through the water supply or water processing, both for households as well as for the industry.

Many of the larger water utilities, such as American Water Works or Xylem stand bilancially, they are in good shape, e.g., they generally have have a relatively low level of debt, but they are also very high. rated For a possible investment, I have taken a look at the LYXOR WORLD WATER (DR) UCITS ETF, because you can invest in many companies at the same time. companies at the same time, the risk is somewhat spread and the possibility of for long-term investment through subsequent purchases. The ETF has been High in November of the last year from over €61.00 to below €46.97 fell in the middle of last month, but has since recovered to above 49.00€ since then.

If this rise continues and the downtrend is broken, prices could broken, prices above €51.50 could be reached again.
With a
continued correction, even more favorable purchase prices of 46.00€ and below. 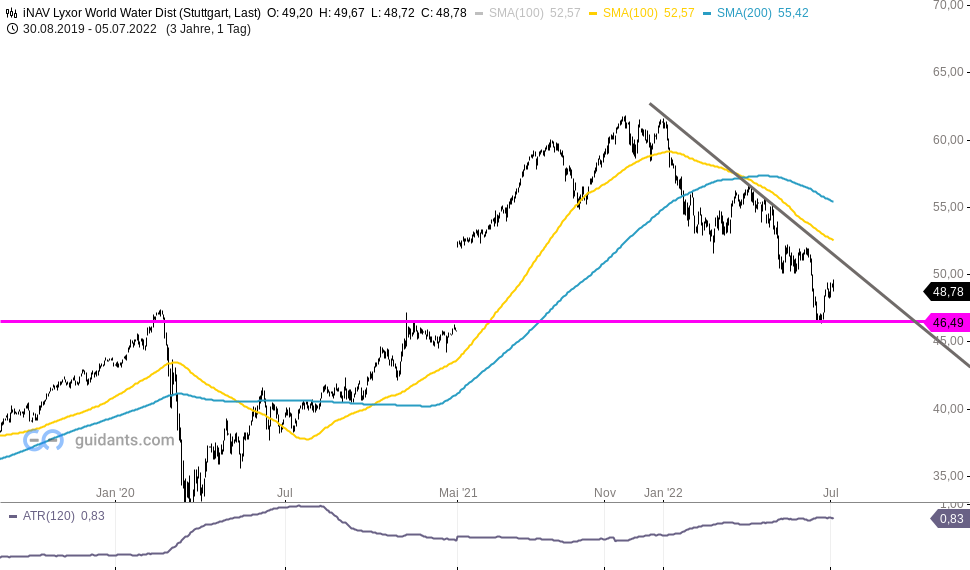