Vonovia – is the German real estate market about to collapse?

The share of the real estate company Vonovia, which owns around half a million apartments in
Germany seems to be a safe investment at first glance. After all have
real estate prices in Germany have risen by 81% over the last 10 years.
They have even almost doubled in growth regions (source: Statista). Especially with rising
inflation figures, investments in this area have become increasingly popular. The extremely high
In addition to skyrocketing prices, demand has been booming in recent years, with
profiting sectors such as the construction industry and retail.
However, it is precisely the inflation factor, the rising cost of living, and the energy crisis
are causing growing concerns about a severe almost global recession and economic
Difficulties. Production losses due to gas shortages or the bankruptcy of companies
due to the high level of debt combined with rising interest rates, could lead to increasing
unemployment and thus a renewed decline in demand for real estate.
The company also has, like most other duet real estate groups, a
fairly high level of debt. With an EBIDTA of approx. € 2.2 billion, Vonovia has
currently has debts of almost €48 billion. The company itself publishes
27 billion was financed through bond issues. In addition this year
financing through promissory note loans of over €1 billion and over half a billion euros
by borrowing from banks.

A few days ago it was announced that the US major investor Ray Dalio with his
hedge fund Bridgewater, which has short positions worth billions of euros on a number of European equities.
has also shorted Vonovia. This is a short sale of almost 4
million shares in the company. The fact that he is often right with his bearish analyses was shown by
itself with large gains from short positions in 2008 and in the Coronacrash 2020.
From a chart perspective, I believe that the share price, which has almost halved since August of last year, still has some
Air down. The share price, which has just reached an important support at €32
could, in my opinion, continue the downward movement to €27. If
the support does not hold, I see a further price decline to around €24 realistic.
Should the share price recover, strong resistance would be expected at €35. 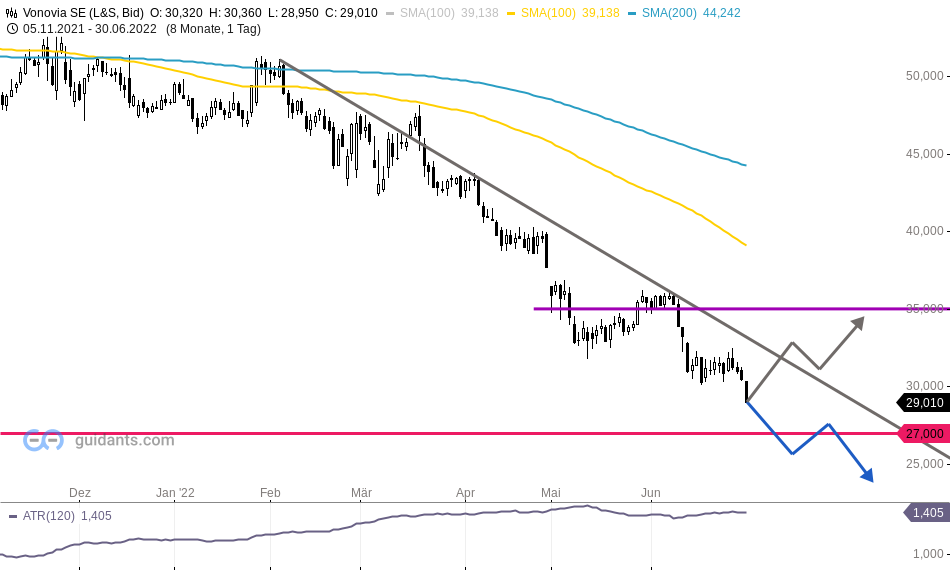