Qualcomm: Will the rise continue?

As described as a possibility in the July 7 article, Qualcomm stock has surged in recent weeks.
The share price, which was quoted at $128.50 at the time, has since risen by over 20% to $155.86 and stands at $155.48 before the US market opening.
Thus, the downward trend that started at the beginning of the year was broken and the moving average of the 50 and the 200 last days in the daily chart were overcome.

Stable business figures over the last quarters and innovative products,
such as a new energy-efficient chip for wearables, provide a stable foundation for the share’s strength.

Next Wednesday (July 27), Qualcomm will release its financial results for the past quarter.
In doing so, earnings per share of $2.89 and revenue of approximately $10.87 billion are currently expected.

In contrast, last quarter reported $3.21 earnings/share and revenue of $11.16 billion,
but only $1.92 earnings/share in the year-ago quarter and sales of about $8 billion.
Thus, a slight decline from the last quarter is expected, but still significantly more than in July last year.

Chart-wise, the break of the downtrend and the overcoming of the moving averages should still be seen as bullish.
I see the next resistance at around $160.00, should this be overcome, further rises are more likely.
Another possibility would be consolidation. In this context, I see the next support at around $150.00. Should this not hold, a further decline to around $140.00 would be likely. 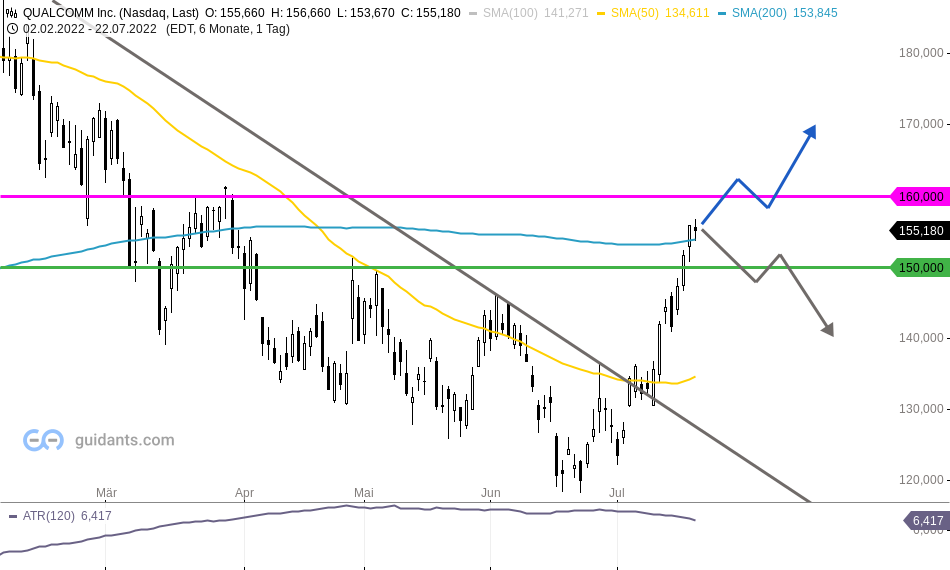